Riding to Tasmania for FarRide #17

Having just flown in the previous evening I was fair tired and so stayed in bed a little longer then I normally would and did not get away until 09:40. I was heading for Port Melbourne to catch the ferry to Tasmania for the Tas FarRide #17. The ferry didn’t leave until 19:30 but all vehicles needed to be there by 18:30 to get on board. 730 km in 8hrs 50mins. Should be easily doable if no hold ups along the way.

Smooth getaway with my first fuel stop at Tailem Bend. The GPS said I had 4 minutes stationary. No bad.  The weather looked progressively worse as I got closer to the South Australia, Victoria boarder. It was getting on for lunch time so I thought that I would wait to put on my wet weather gear till then or at least until it rained heavy enough that it need to be put on. Well I actually managed to dodge the down pours fairly well and just caught the skirt of one shower which resulted in just my knees getting slightly wet.

I didn’t need to stop until I reached Nhill. I fueled up again and went inside the roadhouse restaurant to see what food they had to offer. As I just wanted to have a quick feed and a coffee I went for the ever chancy bain-marie food. I just hoped it was okay as I was get on the ferry and didn’t want food poisoning while walking on a floor that would be moving underneath me. 2 dim sums, 2 potato cakes and a chicko served to fill the spot left vacant since dinner last night. As it turned out it was fine.

I checked the GPS and it had taken just 15 minutes to refuel and have a feed. Happy with that. I was on my way again and it was smooth sailing again and making good time. Then about 10 km short of Horsham I was following a large 4 WD about 300 metres ahead of me. At the same moment I noticed a vehicle, a black Mercedes pulling to a stop from a road to the left. The 4WD indicated to turn left. By this time I had closed the gap to about 100 metres. Have you ever had one of those “Heart in your mouth moments”. The Black Mercedes started to accelerate out onto the road in front of me to turn onto the highway and come in my direction. I had a fist full of break and I remember knowing the I was on a collision course a I WAS going to ram into the side of the vehicle. It is amazing what goes through your mind in a short few seconds. I was history and I knew it. Then I saw the Mercedes slam its breaks on. I managed to slip past the front of the car. My heart began to beat again. As it happened I had managed to slow a considerable amount but I would not have been able to stop totally and it would have hurt. I was doing 100km/h at that moment when I seen the car start to pull out but it seemed like 200. I glanced at the drivers face as I went past and I could see her face in her hands and her eyes obviously knowing just how close it was and it would have been her fault. I rode on for a few kilometres and then pulled up for a rest and check my bike. During the heavy breaking I had felt the rear tire rise. I think I just needed to gather my thoughts a bit as well. The Bike was fine as has the front tire. Well it’s not the first time I (or many other bikers) have had this happen to them, but I hope it’s the last. 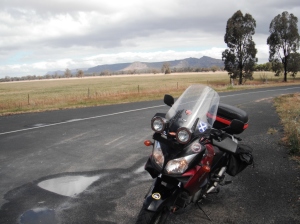 Not a good day for photo’s so I didn’t take to many.

I mounted up again and continued on. I refueled again about 100 km short of Melbourne and the rest of the ride was uneventful. After I refueled I had receive a text message from the Spirit of Tasmania request that bike riders be there by 18:00 due to the number of motorcycles traveling on board.

I arrived at the pier to find about 250 “Outlaw motorcycle club” members with their Harley’s. What a lot of machines. All the chrome and duco shining. It was a WOW moment. There must have half a million dollars’ worth of bikes in front of me. I also thought it could be an interesting overnight crossing. As it turned out they were all very well behaved and intended having a good ride around Tassie.

Not sure if I have ever seen so much expensive machinery in one place before.